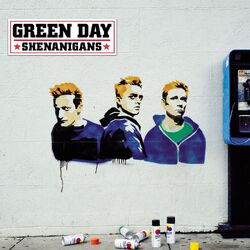 Shenanigans is a compilation album of Green Day, released in 2002. It contains B-sides, rarities, covers, and a previously unreleased track, "Ha Ha You're Dead", which was recorded in the late 90s, but never legally released. Shenanigans reached #27 in the US charts upon its release and has sold 200,000 units there as of August 2006. Even though the original cover does not feature a title, several retailers fixed confusion over it by designing a sticker plastered on the side and shipped around the world. It is unknown who the creator is, but he is reported to be from Puerto Rico.

All tracks by Billie Joe Armstrong (lyrics) and Green Day (music), except where noted.

There is some confusion over the rare song "DUI", written by Tré Cool, which is mentioned in the Shenanigans track listing, but is not on the album. In the track listing, "DUI" is listed between tracks nine and ten, "Tired of Waiting For You" and "Sick of Me" respectively. All of the song information except for the title is hidden by a large spot of spray paint. This led to many years of speculation by fans. Finally in 2006, on the Idiot Club website, in the Question and Answer section, Mike joked that it was removed because it was filled with "great advice," then Billie Joe stated that he "likes irresponsibility, but not that much irresponsibility".

The song "DUI" can be found in its entirety at Green Day Authority. This version is very low quality and the CD quality version can be found in the forum section of the site.

According to Green Day's official site, the song is featured on a Japanese version of the album.