Raj Punjabi was the original drummer for Green Day (then known as Sweet Children).[1]

Raj Punjabi joined Sweet Children in 1987 and served as a drummer and backing vocalist for around a year before leaving the band and being replaced by John Kiffmeyer. Not much is known about his time with the band or his reasons for leaving.

Raj was in born in Connecticut and later moved to Rodeo, California where he attended Pinole Valley High School with Billie Joe Armstrong and Mike Dirnt. Raj is of Indian descent and both of his parents are originally from Mumbai, India. Raj has been engaged to Netty McKenzie since April 9, 2015 whom he has four children with; a son named Brendon and three daughters, Nuri, Alexis, and Kaylee.[2]

He currently lives in Vancouver, Washington. 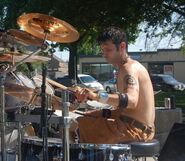 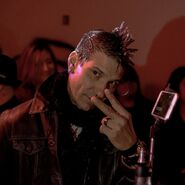