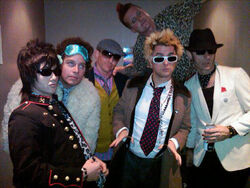 Foxboro Hot Tubs is a garage rock side band of Green Day formed in 2007. The band includes all members of Green Day, touring members Jason White and Jason Freese, and Kevin Preston of Prima Donna. Their first album Stop Drop and Roll!!! was released on April 22, 2008. The name "Foxboro Hot Tubs" is the alias Green Day uses to book secret shows.

The group made its debut in December 2007 with three songs on their website. Soon after, the Foxboro Hot Tubs were discovered and subsequently made headlines, being heralded as the next secret side project of Green Day, which was later confirmed by the band themselves. Billie Joe Armstrong told NME magazine: "The only similarity between Green Day and Foxboro Hot Tubs is that we are the same band." His reasons for starting the band, also told to NME magazine, were that they "love to play music and be spontaneous, and after a few late-night jams and a few too many bottles of wine, we were inspired to record some rockin' eight-track recordings." In a similar manner to other side project The Network, Billie Joe has adopted an alter ego for Foxboro Hot Tubs - Reverend Strychnine Twitch. "Strychnine Twitch" is also mentioned in the lyrics to the title track, Stop Drop And Roll: "Sixteen and a son of a bitch/got a gun and a strychnine twitch".

The band consists of Billie Joe Armstrong, Mike Dirnt, Tré Cool, Jason White, Jason Freese and Kevin Preston. While the band's history is, as yet, unknown, they comprise the members of Green Day , who are performing "garage" music under a nom de plume. Fans of Foxboro Hot Tubs have noted, on the band's MySpace site, many musical similarities between the band and Green Day. Among the common traits listed are Billie Joe Armstrong's "unmistakable" vocals and guitar playing, and a rhythm section which recalls the sound of Green Day's own Mike Dirnt and Tré Cool.

On December 8, 2007, Foxboro Hot Tubs' site released the band's debut EP, Stop Drop and Roll!!!, in streaming and downloadable mp3 formats, free of charge to the listener. Five days later, on December 13, the mp3s were taken off the site, which then displayed just a clock. The mp3s were reinstated on December 16, but were again removed and replaced with the clock; later the website was changed to simply redirect to the band's MySpace.

Soon after, the song "Mother Mary" became a hit on alternative rock radio, hitting #16 on the Billboard Modern Rock Tracks chart. The songs "The Pedestrian" and "Alligator" were featured in the Hollister Co. jukebox throughout the summer. The name "Foxboro Hot Tubs" was explained in an email that was sent to MTV News: "The Foxboro Hot Tubs were a place we used to sneak booze and chicks into late at night. But most of the time it was just 'dude soup'." Foxboro is a housing development located in Rodeo, CA.