Billie Joe Armstrong (born on February 17, 1972 in Rodeo, California) is a member of the bands Green Day, Foxboro Hot Tubs, The Network, and Pinhead Gunpowder. He is married to Adrienne Armstrong (neé Nesser) and has two children, Joseph Marciano (Febuary 28, 1995) and Jakob Danger (September 12, 1998).

Billie Joe Armstrong was born and raised in Rodeo, California, a town 24 miles north of Oakland, as the youngest of six children. His father, Andy Armstrong, was a jazz drummer and truck driver for Safeway to support the family. He died of cancer on September 10, 1982 when Armstrong was 10. The song "Wake Me Up When September Ends", is a memorial to his father. He has five older siblings: David, Alan, Marci, Holly, and Anna. His mother Ollie worked at Rod's Hickory Pit. Armstrong and Mike Dirnt got their first gig at Rod's Hickory Pit during their early years.

Armstrong's interest in music started at a young age. He attended Oakland's Hillcrest Elementary School, where a teacher encouraged him to record a song titled "Look For Love" at the age of five on the Bay Area label "Fiat Records". After his father died, his mother married a man that her children despised, which made Armstrong retreat further into music. Armstrong dedicated a song to him called "Why Do You Want Him". At age 10 while attending Carquinez Middle School in Crockett, CA, he met Mike Dirnt, and they immediately bonded over their love of music. As a teenager he originally was into metal music, but got into punk after hearing the Sex Pistols song "Holidays in the Sun". Armstrong has also cited The Replacements and Hüsker Dü, both from Minneapolis, as major influences. He attended John Swett High School, also in Crockett, and then Pinole Valley High School, in Pinole, CA, dropping out on February 16, 1990, a day before his 18th birthday, to pursue his musical career.

In 1986, Armstrong formed a band called Sweet Children with childhood friend Mike Dirnt at the age of 14. In the beginning, Dirnt and Armstrong were both on guitar, with another man on drums, and a man called Sean Hughes on bass. After a few gigs and a demo recording (later featured at the end of Green Day's Kerplunk!) He and Mike Dirnt decided to join up with drummer Al Sobrante in 1988. At the same time Dirnt switched to bass and they became a 3-piece band. They changed their name to Green Day in April 1989, allegedly choosing the name for their fondness of marijuana. That same year they recorded the EPs 39/Smooth, 1,000 Hours, and Slappy, later combined into the LP 1,039/Smoothed Out Slappy Hours, on Lookout! Records. Tré Cool eventually replaced Sobrante in late 1990 when he left Green Day in order to go to college. California Punk band Rancid lead singer Tim Armstrong asked Armstrong to join Rancid, but he refused due to the progress with Green Day. Tré Cool made his debut on Green Day's second album, Kerplunk!. With their next album, Dookie (1994), the band broke through into the mainstream, and have remained one of the most popular rock bands of the 1990s and 2000s with over 60 million records sold worldwide.

Apart from working with Green Day and side-band Pinhead Gunpowder, Armstrong has proved himself busy in the music world, collaborating with many artists over the years. He has co-written for The Go-Go's ("Unforgiven") and former Avengers singer Penelope Houston ("The Angel and The Jerk" and "New Day"), co-written a song with Rancid ("Radio"), and sung backing vocals with Melissa Auf der Maur on Ryan Adams' "Do Miss America" (where they acted as the backing band for Iggy Pop on his Skull Ring album ("Private Hell" and "Supermarket")). Armstrong has produced an album for The Riverdales, and is also rumored to be part of a side project called The Network. The Network released an album called Money Money 2020. Many Green Day fans who listened to the record remarked the similarity between the two bands. Money Money 2020 was released on Adeline Records, a record label co-owned by Armstrong

Armstrong received his first guitar, a Cherry Red Hohner acoustic, which his father bought him. He then received his first electric guitar, a Fernandes Stratocaster copy that he named "Blue", when he was ten. His mother got "Blue" from George Cole, who taught Armstrong the basics on the guitar. Armstrong says in a 1995 MTV interview, "Basically, it wasn't like guitar lessons because I never really learned how to read music. So he just taught me how to put my hands on the thing". Before the guitar belonged to George Cole it belonged to a guy from the band Big Bang Beat. He initially installed a Bill Lawrence pickup, but later switched to the Duncan JB model. He toured with this guitar from the band's early days and into their first few major-label tours. "Blue" also appears in several of their music videos starting with "Longview", "Basket Case", "Brain Stew/Jaded", and appearing most recently in "Minority". There are two stickers on it saying "BJ" standing for "Billie Joe". Armstrong has made several replicas of this guitar and uses them at concerts, as the original Blue was damaged during a concert, and is too fragile to tour with today. Blue is supposedly still used for recording, but the large crack in the body makes it dangerous to use on stage; it might become too irreparably damaged to use. Copies of Blue have been in use since at least 1997 or 1998. He also owns Gibson SGs and a sonic blue Fender Jag-Stang.

Today Armstrong mainly uses Gibson and Fender guitars. Twenty of his Gibson guitars are Les Paul Junior models from the mid- to late-1950s. His Fender collection includes: Stratocaster, Jazzmaster, Telecaster, a Gretsch hollowbody and his copies of "Blue". He states that his favorite guitar is a 1956 Gibson Les Paul Junior he calls "Floyd". He bought this guitar in 2000 just before recording their album Warning.

Armstrong also has his own line of Les Paul Junior guitars from Gibson. He also uses his signature line now in many of his tours today. Armstrong also uses Gretsch guitars.

He can also play the drums. He plays them quite a lot at live gigs. 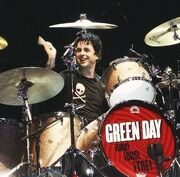 In 1990, Armstrong met Adrienne Nesser, at one of Green Day's early shows in Minnesota, whom he married on July 2, 1994. The day after their wedding, Adrienne discovered she was pregnant. Their first child, Joseph 'Joey' Marciano Armstrong, was born on March 15, 1995. Their second child, Jakob Danger Armstrong, was born on September 12, 1998. Adrienne is the co-owner of Adeline Records, along with Armstrong.

Armstrong has identified himself as bisexual, saying in a 1995 interview with The Advocate, "I think I've always been bisexual. I mean, it's something that I've always been interested in. I think people are born bisexual, and it's just that our parents and society kind of veer us off into this feeling of 'Oh, I can't.' They say it's taboo. It's ingrained in our heads that it's bad, when it's not bad at all. It's a very beautiful thing." 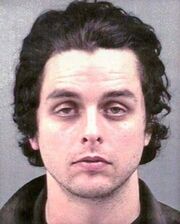 Armstrong was arrested by Berkeley police in January 2003 for drunk driving after being pulled over for speeding. He received a Breathalyzer reading of 0.18, more than twice the California legal limit of 0.08.

In April 2007, Armstrong and his wife sent photos of their spring break working with Habitat For Humanity and a diary to GreenDay.net.