Australian Tour Souvenir Edition is a live EP by Green Day that was released as part of the Australian Tour Pack edition of Insomniac in February 1996 through Reprise Records.

All lyrics written by Billie Joe Armstrong, except where noted; all music composed by Green Day. 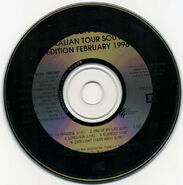